By Steve Coast on February 18, 2015 in openstreetmap, talks

I did an interview about OSM on decentral tv. Their page here over here or, here is the youtube video directly:

Get your ticket
OSM PLUS is in two weeks at the Marriott Union Square in San Francisco. You can get your tickets here and if you use the discount code OSMPLUS25 you’ll get 25% off!

The provisional program is now live here. Similar to last year, OSM PLUS is an exciting mix of talks and panels from a variety of businesses using OSM every day.

Come and hear from Factual, MapZen, ESRI, CartoDB and many more on the shared opportunities and challenges of using OSM data in the real world: Data quality, community engagement and how open licensing works.

Please do reach out.

Last week I gave a talk at BDNT about my kickstarter project (you can still buy a print here). It’s not really a blow-by-blow or a list of tips, but a more broad and deep look at it.

By Steve Coast on June 4, 2013 in maps, openstreetmap, talks

In just under a week, OSM PLUS will be held at the San Francisco Marriott Union Square. We have over 60 people attending and a very strong set of talks and sponsors.

The support for the event has been overwhelming since I announced the idea at last years State of the Map in Portland. We’ve tried repeatedly to bring business to SotM and it’s not really worked, in my opinion. Trying to find the right overlap between some extreme ideologies on one side and practicalities on the other didn’t leave a whole lot of room for consensus.

Trying something new like this, to bring explicitly for-profit organizations together, has worked out really well so far and I can’t wait for the day itself.

By Steve Coast on May 8, 2013 in economics, running lean, startups, talks

I went to a tech meetup, BDNT, last night in Boulder. I used to go often when I lived in Denver a couple of years ago. Six or so startup-alikes get five minutes to pitch then five minutes for questions. These are the three that I remember:

AmbientBox pitched an analytics platform for restaurants, bars and shops. You buy a magical box ($250) and plug it in. It records various things like noise level, CO2 (to detect how many people are in the room), lighting levels and so on. It uploads this and then you use an app to figure out when the ambiance is “good.” A pretty ipad app or website will theoretically let you use this data to figure out how to improve your space, get more customers and so on. You pay $100/month or something. Sort of Nest for restaurants, maybe.

ChatLingual is magical IM chat on the web with seamless translation between languages. So, we each chat in our language and it’s translated on the fly. Monetization is a little unclear, pay per chat, tokens or something. Secret plan is to build the best translation engine possible.

FitTrip is (will be) an iPad app which makes working out more fun. You connect a heart rate monitor and your iPad magically shows you a video of you, say, running the grand canyon. If your heart rate speeds up then the video speeds up, like you’re really there. Content is paid for; so you get one free virtual run then you pay to run other places. There are competitors out there for this idea.

Jack Dorsey: 3 Keys to Twitter’s Success from 99U on Vimeo.

Interesting Ed Parsons talk with some behind-the-scenes pictures of what Google uses to manage it’s geographic infrastructure. Nice enough talk but definitely for the Google audience, a little implicit that Google invented everything. Random dig at MapQuest who were apparently Google’s original map supplier (who knew?).

Interesting screen shot of what I’ll call GoogleGIS with streetview bubbles flattened out in to a donut as part of the editing process. Looks like a Mac app in some third party language/widget set:

Ed uses a tiny snippet of video of this guy who’s cheerfully editing map bugs submitted by the crowd;

I’m not entirely sure how accurate that is though.

James has been running Google+ Hangouts and I joined for one a few weeks ago;

State of the Map 2012 was a fantastic success due to so many people coming together to make it so. There were too many sessions to see but the ones I caught were excellent. See twitter and flickr for lots of thoughts and photos.

Here are my slides, I’ll add any recordings as I become aware of them. 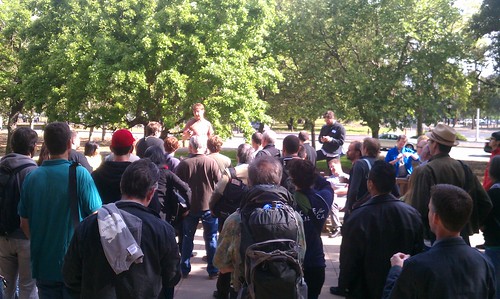 I’ve put up a registration page for wherecamp 2012. It’s right before Where 2.0 on the 31 March & the 1st April (which also happens to be the OSM license change deadline). Details like venue are still being worked out. It’s free to attend (but donations welcome) and people like you publicize the event so we can get awesome sponsors to pay for things like food. Also, feel free to get in touch if you’re so inclined.

I founded OpenStreetMap and designed how most of it works. I work at TomTom. All comment is my own.

The Book of OSM

I put together a book of interviews, funded by a kickstarter. Learn about the start of OSM from the people who were there!

I've run a few kickstarters which produced GPS and mass routing artwork. You can find them on Etsy.